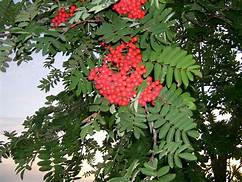 Mountain ash has a very interesting history, and you will learn something of its story in this profile of a tree. We in Southeast Alaska are fortunate to have so many mountain ash growing in our forest. They flank the road down half my long driveway, and are lovely to look at any time of the year. Long ago, this lovely work of nature was known as the druid tree.

Did you know the mountain ash has an alias? It is also known as the rowan tree. The ancient druids revered it. This group included lawyers, poets, and doctors, but were best known for being religious leaders. Druids believed the tree, having the power to enhance life and create 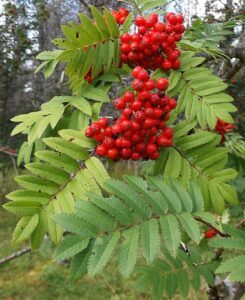 magic, held forces that could counteract evil and give protection from witchcraft.

For this reason, the tree was often planted in churchyards. It was also believed that by wearing a sprig or a cross made from the wood, the person would be safe from such negative powers.

Druid priests also used the bark and berries of the tree to make a black dye used for garments at lunar coronations. The tree was not only used around graveyards, but is also found growing close to stone circles. Besides being planted in graveyards, it could also be found by ancient burial sites, where it was believed to protect the spirits of the dead.

A member of the Sorbus genus, mountain ash is part of the rose family. The berries are edible, though rather bland. Pick them after the first frost and you will find they are sweeter. Nutritionally, they are high in vitamins C and A. When made into jam or jelly, their flavor may be enhanced by adding sugar, ginger, and apples.

The birds, however, need no additions but find the mountain ash berries to be choice food. Thanks to these feathered creatures, the seeds have spread throughout the woods of remote Alaska.

Though the berries are edible, it is not the main reason for adding this shrub or tree to your garden assets. It is valuable any time of the year as an ornamental. The clumps of white blossom, which later change to bright red berries, give two attractive phases to the plant’s growth. Its leaves, pinnately compound, are attractive by themselves.

In the spring, these clusters of white flowers adorn the tree. Though the flowers gradually wilt and turn brown, they are preparing for the next stage of growth, when those brown flower remains transform and ripen into stunning bright red berries.

The process this tree goes through to reach the berry stage is quite remarkable to watch. First, there are lovely clusters of white flowers. In early summer they all turn brown, giving the appearance that they are wilting or dying. Then they make this transformation, first becoming brown clusters that gradually shape themselves into brownish berries.

As the season matures, so do the berries. They change color to a dull orange; then they ripen and become the clusters of red berries. It is an amazing transition. Makes me wonder how the tree makes this magical change. Incredible!

Once the berries fall from the tree and the temperatures drop, the mountain ash leaves change to spectacular shades of red-orange and yellow, creating yet another beautiful display. In the fall, my woods around my house are studded with these bright bursts of color. I’ve been told I have the largest fall gathering of these trees anywhere in our community.

Many ancient groups have legends about the mountain ash under its rowan tree alias. There is a Greek legend concerning Hebe, the goddess 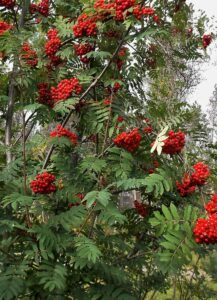 of youth. Hebe had a magic chalice from which she served a drink to the gods from time to time, to keep them young and healthy.

She lost the chalice, and the gods, believing it essential to recover it, sent an eagle to find it. This sacred cup had been stolen by demons, who then fought the eagle when he tried to take it back.

The feathers and drops of blood that the eagle lost in the battle fell to the earth and grew into a rowan tree. What a lovely legend!

In Norse myth, the rowan was the tree from which woman was made, while man was made from the ash tree. The word “rowan” comes from the Norse word, “runa,” which means “to charm.”

Our Gustavus moose certainly find the tree charming. They love the mountain ash bark, but, whether by design or by accident, these creatures usually do not destroy the tree. If they ate the bark all the way around the tree, they would kill it.

Rather, they tear off a few long strips of the bark. The mountain ash repairs this damage by sending new shoots out through the gaps.

Eventually, the moose-chewed tree resembles a bush for the first several feet, with tall branches growing above. I have two mountain ash trees growing side by side in my back yard, both of them bushy at the base, where I have watched moose harvesting the bark.

I’m including a picture of one that grows right by my house; the moose have converted the tree into something a bit more than a tree. It is quite attractive.

Of course, since the tree has berries, various groups have tried fermenting them. Celts made a variety of alcoholic drinks from the juice. The Scots were satisfied with making wine. The Irish made mead or cider. If you would like to try creating your own drink, you might try something milder, like brewing the berries into tea.

The wood, being strong and resilient, has been used for walking sticks and carvings. Tool handles, spindles, and spinning wheels have traditionally been made of this wood.

I am so glad I have many of these trees on my property. Whether you call the tree a mountain ash or whether you use its alias, the rowan tree, I am sure you will agree that it is a beautiful work of nature.