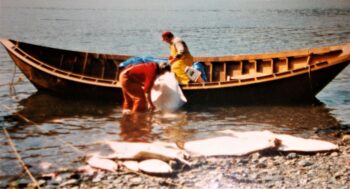 Below is the transcript of the text of this video.  If you’d like to read along, please feel free to do so.

Welcome, video watchers. This is Fran Kelso, with https://build2winaffiliates.com. Here is your second Alaska story, in which I will show how procrastination can actually become a motivator.

In training courses for online affiliate business, we are warned of the dangers of procrastination. We are urged to stay focused; to take action; to avoid the trap of thinking we can do it later, rather than now. We must ask ourselves, “What is the price of procrastination?”

For 20 years, I lived on Banjo Beach on Spruce Island, close to the Native village of Ouzinkie. For a period of five years during that time, a friend named John shared the homestead with me.

John and I got along quite well, except for one habit of his that drove me nuts. He was a classic procrastinator. However, once he actually used his bad habit to find a way to accomplish a goal successfully.

Now, I do admit that sometimes when you are working on a specific project, and especially when you are writing, you have to leave time for ideas to distill in your head. If you are such a person, put that project on a back burner and take action on something else. Then you are letting your ideas percolate and will need to give them time to settle. Procrastination is acceptable here.

If you watched the first Alaska video, you’ll remember that I finally had running water in the kitchen. We’d installed a submersible pump, powered by my generator, into the creek.

From the pump, a long hose snaked up to the house and in through the kitchen wall. Now, when the genny was on, I could have running water with the flip of a switch.

Now it became easy to fill all my storage containers. However, when I boiled up a big kettle of water for washing dishes, where did I dump the grey water when done?

For about a year, I had to deal with a five-gallon bucket under the sink. If I forgot to dump it in time, I’d have dirty water all over the kitchen floor.

I wanted a drain installed that would allow the water to go down the sink, out the pipe, and outside, all the way to the beach. I badgered John to get this job done, and in his classic fashion, he procrastinated.

He knew the job needed doing. He just didn’t want to dig the necessary ditch so the drainpipe could be installed. Finally, his desire to see the job completed led him to an alternate solution — he would become a Tom Sawyer and find someone else to dig for him.

Quote: “How does a project get to be a year behind schedule? One day at a time.”

Now, John had his own set of buddies at the beach. One of them, his 17-year-old nephew, Nate, lived with us for a year and went to school in the village. Another, a Russian Orthodox monk, lived at the end of the island in a cabin in Monk’s Lagoon. His name was Father Ioasaph (Pronounced Yo-SOPH.) A Ouzinkie friend, Nick Pestrikoff, called Father Ioasaph “the round man in the black dress.”

These three, John, Nate, and Fr. Ioasaph, spent some time together on various excursions in our 24-foot wooden Opheim dory, built right on Spruce Island. John coined a name for the three of them: “The hunk, the punk, and the monk.”

John decided Nate should dig the ditch. Under John’s close supervision, Nate got the hardest part of the ditch dug — out from the house and down the little hill to the land at creek level below.

I am not sure what form of bribery John used to get Nate to dig that ditch — perhaps he threatened to withhold meals. Perhaps he told Nate if he didn’t dig, all he’d get to eat was Spam.

As it came in a can and could keep indefinitely, Spam gained the name “Aleut Steak” from the villagers, as they could always cook some up for a main course when no fresh meat was available.

Nate hated Spam. That year at Christmas-time, as a joke, my Ouzinkie friend, Georgia Smith, created a Spam cookbook for Nate. The book contained an array of classic recipes used in village kitchens. I wonder if Nate still has that book?

Quote: “Someday is not a day of the week.” (Janet Dailey)

At any rate, Nate got half the job done, then quit, telling John he had other things to do, and John could finish the job himself. That wasn’t going to happen. Instead, John next appealed to Father Ioasaph, asking him if he would complete the digging.

Father Ioasaph, who affectionately called John “the fallen Lutheran,” must have agreed because he knew John, and he knew we needed that ditch, and that John was not going to get the job done.

At least, Father got the easier part of the job. When he finished, John did not procrastinate at all, but got the drainpipe in and down to where the water would run out, high on the gravel beach, where it would filtrate into the beach gravel very well. He enjoyed such work, so felt no need to put it off until later.

Magic! Now I could pour water into the sink and it would travel out and far away. We had a celebration on the beach that day.

Quote: “The only difference between success and failure is the ability to take action.” (Alexander Graham Bell

Without John’s procrastination, the ditch would have been done a year earlier. However, he let his bad habit lead him to a different solution.

The lesson here for those of us with online business: If you don’t want to do a job that has to be done, learn to delegate. Find another person who has the skills needed and hire them to help you. Otherwise, do it yourself in a timely fashion. Just get ‘er done!

If you hire someone, it will cost you, and it may take more time to get the job done. However, now and then one must utilize more than one way to accomplish a task.

Go to my website, https://build2winaffiliates.com, and click on any Wealthy Affiliate banner or image and you will be taken to a page where you can learn everything about this business. (Or, you can click on the banner below.) You may be led to a life-changing experience — it has been for me.

2 thoughts on “What Is The Price Of Procrastination?”