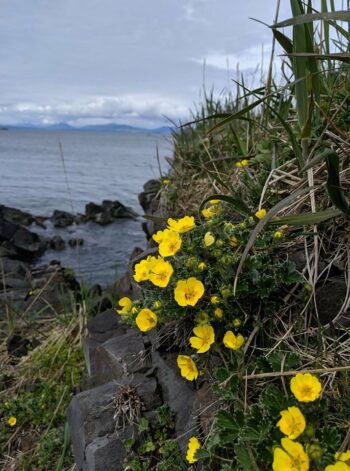 (PLEASE WATCH THE VIDEO.  Below is a transcript of the narration.)

Hello, and welcome. This is Fran Kelso with build2winaffiliates.com. My business operates under the Wealthy Affiliate umbrella, and is an affiliate marketing company. Though I live in the tiny town of Gustavus, Alaska, my marketplace is the world.

I have lived in Alaska since 1969. That makes 50 years this year (2019). I would not live anyplace else. I believe we can learn valuable lessons from Alaska success stories.

At first, I lived in Kodiak, and then in 1977, built a cabin with help from friends on nearby Spruce Island, close to the Native village of Ouzinkie. In the summer of 1979, I moved there to stay and lived in the cabin for 20 years.

This drawing of my cabin was done by Carole Baker, a Gustavus artist.  She also did the image on the front of my book.  When you stand in front of my house at Banjo Beach and look directly across the waters of Narrow Strait, you see Kodiak Island.

I believe that, for anyone living a bush lifestyle in rural Alaska, one must have certain attitudes that will help them survive. I call these Alaskan attitudes. I put my story of Spruce Island in a book by the title, Alaskan Attitudes, which is available through Amazon.

Alaskan attitudes include many of the same qualities one must cultivate for online business success, such as persistence, a positive outlook, self-belief, willingness to work, courage to try new things, resourcefulness, commitment, focus and, of course, ingenuity. It’s what we call success, Alaskan style.

Quote: “What’s the secret to success? It’s no secret. You need a winning attitude, honesty, and integrity, and a burning desire to succeed.”

Mundane chores could become major challenges, until you developed a system for dealing with them. One such challenge for me involved collecting water for drinking, washing dishes, and general cleaning.

For the last five years I lived there, I had a primitive running water system. A pump brought water up from the creek through a hose, and I could fill all my storage containers. A drainage ditch allowed me to pour water down the sink and it would disappear down the drainpipe and outside.

However, for the first 15 years, my water hauling system involved up to six five-gallon plastic buckets, filled two at a time and propelled from the creek by my two legs and two arms. I had a generous bowl-sized plastic container with a spout that I used for collecting water and filling buckets.

An ample stream wound its way through my property, quietly moving toward the ocean. The stream, which apparently had been around for a while, curved lazily through my meadow. A wide bend before the water hurried to the ocean lay far enough away from shore so the salt water never came up that far.

Here, from a deep hole behind that last long loop toward the ocean, I scooped clear, salt-free water with that big plastic bowl. I could fill a bucket in short order.

Now, hauling those two five-gallon buckets full of water might have been no problem at all for a strong man, but for me they presented a challenge.

My cabin stood on a little rise, falling away to lower ground on either side. I could make it up that little rise from the creek with the full buckets, but then I had to stop and rest. Then I muscled those babies past the kitchen and to my front porch.

Success! As the front door opened into the kitchen, I considered the rest of the job a piece of cake. I often joked, though, that I thought my arms must be getting longer from carrying those buckets. Now I could be considered a “two-bucket woman,” a status symbol in Alaska.

Quote: “There is a powerful, driving force inside every human being that, once unleashed, can make any vision, dream, or desire a reality.” Anthony Robbins

People would ask, “Do you have running water out there, Fran? I’d answer, “Yes, I do. It runs by in the creek and I run down and get it.”

Why do I consider this an Alaska success story? It certainly has all the signs of success. I set a goal and I accomplished it. I had to persist until I got the job done. Being willing to work at the task, I approached it with a positive attitude.

I had to focus on the task so I wouldn’t fall down or spill the water. Because I did not procrastinate, I got the work done in a timely way. I received a reward for my efforts in the form of fresh water — a life necessity.

I do believe that the Alaskan wilderness can train you in the ways of success, make you stronger, and enrich your life.

Quote: “I do not think the measure of civilization is how tall its buildings of concrete are, but rather how well its people have learned to relate to their environment and fellow man.” Sun Bear of the Chippewa Tribe

Though I no longer live in Ouzinkie, I still live in a tiny Alaskan community at the mouth of Glacier Bay, called Gustavus. If you are looking for a business opportunity and live in a remote location, you would do well to check out the company I have joined — Wealthy Affiliate. All you need to start an online business through this company is a computer and a good internet connection.

Go to my website, https://build2winaffiliates.com, and click on any of the Wealthy Affiliate banners or images that you see. You can also click on the banner at the end of this post. You will get a full description of what the company has to offer. You can join for free and try it out to see if it is a fit. Then fire up your computer and travel the world with your business.

I hope you have enjoyed this video. If you have, please subscribe to my YouTube channel. There will be more Alaska stories coming up.