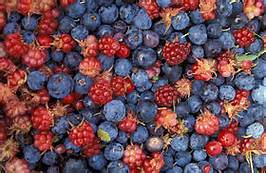 TRANSCRIPT OF TEXT OF VIDEO

I promised you there would be more videos on Alaskan wild and edible plants, so here’s your second one. This one is about berries.

My book, “Plant Lore Of An Alaskan Island,” has over 200 plants described in it, so obviously I can only give you a taste of what is available in these videos. If you have questions about specific Alaskan plants, let me know.

Before I start, I’d like to elaborate on what collecting berries has to do with successfully building an online business. There are several similarities. First of all, you are associating with a like-minded group of people, which is a good start when traveling on the road to success.

You have a common goal and you scheduled the tasks that need to be done to accomplish that goal. You pick an opportune time and then move toward your goal. You don’t quit until you are successful. Now, let’s go berry-picking.

Like foragers from an earlier time, we all knew when it was time to harvest. We watched the crop and the weather and went to pick when all was in harmony.

Quote: “Plant seeds of happiness, hope, success, and love; it will come back to you in abundance. This is the law of nature.” (Steve Maraboli)

Our first berry harvest of the season was salmonberries, because they were ready first. There were good harvesting spots aplenty on our island. One year a group of us, including two nuns, headed toward Pleasant Harbor to look for berries there.

Before I tell you this story, I need to teach you a very valuable village word: “pagook.” This word could mean to borrow with no intention of returning, and involved harvesting from nature or recycling cast-off items. Though it might have a questionable motive, pagooking was considered a worth-while endeavor.

That day we got involved in a serious pagook. We had good intentions and could claim innocence of any knowledge of wrong-doing.

Quote: “When one tugs at a single thing in nature, he finds it attached to the end of the world.” (John Muir)

We decided to hike to David Opheim’s place in Sunny Cove Lagoon, a couple of miles down the coast. On the last hillside before his house, we discovered an open field full of ripe salmonberries the size of half-dollars.

We scattered into the bushes, finally emerging from the far side with red tongues, red fingers, and bags bulging with berries.

Later, over lunch, we mentioned to David the prolific crop of berries this year. He agreed, saying, “There’s a large field of huge berries just up the hill that we’ve been watching. We plan to pick them this weekend.”

Though sheepishly confessing our crime, we did not return the berries. Thus, when we enjoyed our salmonberry jelly that year, we wore an inner smile because we had pagooked the berries successfully.

Quote: “Adapt the pace of nature. Her secret is patience.” (Ralph Waldo Emerson)

Blueberries provided the next berry adventures. We picked after the first frost, because then the worms would be gone. If you wanted a pie, as an example, early in the season, you could soak the blueberries in salt-water for about ½ hour and the worms would float to the top.

A group of us went out early and scouted out the best blueberry spots; then, we’d go to gather. Even Georgia, who didn’t like blueberries, loved to go. Her excuse was that her menfolk liked them.

We looked for the largest berries, of course. Some were dime-sized, and the best ones grew to penny size. Sometimes a bush would be so thick with berries that we’d sit under it for a half hour, picking, picking, until we got them all.

These excursions have left us with precious memories: attitudes of cooperation, desire for knowledge, loving and caring friendship, and sharing with each other made the experience extremely enriching.

Quote: “In every walk in nature one receives far more than he sees.”

Lingonberries, or low-bush cranberries, were the last in the season to be picked. They were also my favorites. I was especially fond of a large bog back of the pumphouse that Jenny Chernikoff had shown me years before.

We actually picked two types of cranberries. One, Oxycoccus microcarpus, is related to commercial cranberries. These berries lie atop a sphagnum hump, looking like miniature watermelons attached by a tiny vine to the main stem.

Oxycoccus were not as plentiful as the lingonberries, but the flavor was the same and could be combined in the collection bucket.

The lingonberry, Vaccinium vitis-idaea, has shiny, deep-green leathery leaves with a grey-green undercoat. The plants could range in size from a couple of inches high to as tall as six or seven inches. No matter the size, the berry was excellent.

Quote: “Great things are done by a series of small things brought together.” (Vincent van Gogh)

This last plant has an edible berry, but it is more commonly used as an edible herb. In Latin, it is known as Streptopus amplexifolius. It has a few common names as well: Watermelon berry, wild cucumber, twisted stalk.

The berries, sweet, watery and another one resembling a miniature watermelon, hung from the plant by a little twisted stalk – hence, that common name. The berries could be used in jelly, but it is said that a few of them are plenty, unless you need a laxative.

I liked the plant best in my salad. My favorite place to gather them was at the edge of Eskimo Cove beach, where the trail came down from the village. At the far corner of the beach, a small trickle of water journeyed over the rocks.

Its banks boasted rich, black soil – what I called a plant equivalent of a chocolate bar.

Here the wild cucumber flourished. Leaves could be added to a salad, if picked when the plant had only a single stem. Later, it branched into several, and the leaves became rather tough.

The stalk could be used in salad as well, if it were thick enough. In the woods, the wild cucumber plant had a thin, fibrous stalk, but near this creek, the stem was as big around as my little finger. Cut into a salad, it added a juicy hint of cucumber taste.

We gathered wild plants from the time they first grew big enough in the spring to the late summer when we were better off harvesting our gardens. The woods and beaches, however, furnished many tasty dishes.

Quote: “The world owes you nothing. It was here first.” (Mark Twain)

Whether you are picking berries or building an online business, the road to success is very similar for either endeavor. Know what you want, set a goal, plan the steps to get there, and go for it…and don’t stop until you’ve reached success.

The most important part is to stick with your plan until you reach your goal.

Quote: “Those who contemplate the beauty of the earth find reserves of strength that will endure as long as life lasts”.

If you want to learn what my online company, Wealthy Affiliate, has to offer in the way of online business, go to my website, build2winaffiliates.com, and click on the first page where it says “Start Here.”

You will find all the information you need about this business opportunity to decide if you might have found a new home. Join me – we can journey together on the road to success.