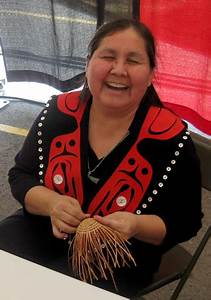 TRANSCRIPT OF TEXT OF VIDEO

Hello, this is Fran from build2winaffiliates.com, with another Alaska success story for you.

Women in rural Alaska are often found to be a special breed. Strong and independent, courageous, capable; yes, and stubborn and tenacious, they also demonstrate many other excellent qualities. It is true — if you have a difficult task to perform, Alaskan women get it done.

After all, Alaska started out as a place inhabited predominantly by men, so the women who came here early on had to be able to handle this mostly-masculine scene and the challenges of living in such a wild place.

Quote:  “A strong woman looks a challenge dead in the eye and gives it a wink.”  (Gina Carey)

It didn’t take long for the men to decide they needed to entice more women to move here. They coined a slogan: ” Alaska: Ten good men for every woman.”

Women began to travel North to investigate this phenomenon, and discovered it to be true. The men definitely made up a large part of the early Alaskan population. Then the women coined their own saying: “The odds are good but the goods are odd.”

Some women took to Alaska and its challenges and elected to stay in the Great North. These women made a success of their lives in Alaska, and helped to make the place habitable for families.

From their ranks rose their own champions. For example, there was Susan Butcher, championship dog musher, who won the grueling Iditarod race, 1100 miles between Alaska and Nome, four years in a row. I used to have a shirt that read, “Alaska, where men are men and women win the Iditarod.”

In my years in Alaska, I have discovered that strong women often made the deciding difference in some project I’d tackled. Such was the case with the installation of my phone line. It probably never would have been completed without the help of my woman friends.

For many years, I lived on my homestead with a CB and VHF radio, and no phone. Then, I began going to Kodiak every couple of weeks, where I would sell some jewelry from leftover stock from my shop, to make a little extra money.

My business grew, and I found myself spending more time on the phone, ordering stock or talking with customers. I’d have to walk a mile and a half to the village to a friend’s to use the telephone.

I had several discussions with the phone company. They had a policy that they would put in a phone line for anyone who lived in range of their service. Finally, they agreed to put in a line to the dump, which lay at the furthest end of the Ouzinkie road system, and a half-mile from my house.

Because the road to the dump bordered the airport runway, the phone company had to bury the line, so they sent two men and a Ditch Witch to do the job. It took them two weeks to complete it. Now a post stood outside the dump fence, with a terminal box atop it.

Quote: “Perseverance is stubbornness with a purpose.”

For a year, I used to hike there whenever I needed to use the phone. After all, a half-mile hike is better than a mile and a half. For rainy days, I found a hat with a little umbrella attached to the top of it. This stylish chapeau kept me and my papers dry while I made my calls.

The phone company had told me that it was up to me to lay the last half-mile of line to my house. Finally, I decided to figure out a way to do just that.

Quote:  “A woman is like a tea bag — you don’t know how strong she is until you put her in hot water.”  (Eleanor Roosevelt)

A friend of a friend in Kodiak had a Ditch Witch. I pestered this man so much about bringing the machine over to finish digging the ditch for the line that he finally agreed, possibly just to get me to leave him alone.

I got what I thought were all the supplies for the job from the phone company, and the Ditch Witch owner found a landing craft to haul the machine to Spruce Island. They planned to arrive on a Friday evening so we’d have the weekend to dig.

Instead, they did not arrive until late on a Sunday morning. It took them an hour and a half just to get the machine to the starting point of the ditch. They did get the digging started, and then they got over the first little rise and headed down a steep side-hill slope leading to level ground below. They had just started down this incline when the Ditch Witch got stuck.

Quote:  “Persistence is to the character of man as carbon is to steel.”  (Napoleon Hill)

They’d dug a total of 330 feet, out of a half mile total. The owner of the landing craft came up and said, “You’d better get that machine unstuck and back to the beach. I’m leaving soon, and if you aren’t there with the machine, I’ll leave without you.”

Shortly after, the swarm of people that were there to help vanished, along with the machine. All that remained were three women — myself, my neighbor, Linda, and my Kodiak friend, Cat.

We made a formidable trio. A Ouzinkie friend, Nikolai, called Linda and me “Bush bitches,” a title we were honored to accept. Cat had accompanied me on many challenging adventures. We called ourselves “the Fern Sisters.”

We decided we’d hand-dig and bury the line ourselves. We used a spade with a long, narrow blade. One person cut into the ground about eight inches deep; the second person pushed the line to the bottom of the cut, and the third covered and tamped.

I’m including a picture here that I took as we headed down the slope of that steep ravine. The picture won’t win any photography awards, but it will give you an idea of the challenge we overcame.

Quote:  “The three of us are more than friends — Together, we’re like a small gang.”

Quote:  “The will to persevere is often the difference between failure and success.”

When we got most of the way down the ravine, and about 1/3 of the way to my house, we ran out of wire. I trudged back to the telephone terminal and called the phone company, ordering two more spools of wire.

“Also, we have no grease to put in the splice boxes. Can you send some?”

“Do you have Crisco?” the telephone man asked. “Use that.”

Our supplies came on the mail plane, and we continued the job. We installed a second splice box after the next spool ran out, and then made it all the way to my house with the third spool.

Linda knew a little bit about phone hookups, as her ex-husband had been a telephone lineman and had taught her some basics. This bit of experience helped when installing the splice boxes, but at the house, Linda created an error by hooking all six of the colored wires in the cable to the corresponding colors in the receptacle at the house.

No dial tone. Now what?

Back to the terminal box I went, and again called the phone company. I learned that only two of those wires needed connecting. When we corrected the error, we were amazed and overjoyed when we got a dial tone. I then had phone service for the rest of the time that I lived at Banjo Beach.

Quote:  “There is no limit to what we, as women, can accomplish.”  (Michelle Obama)

Can you see the correlations that can be drawn from this story and applied to our online business? Think about these things: Once the path is set, don’t give up until your goal is accomplished. Believe in your own abilities and learn by doing.

Cooperative effort is often quite successful in finding a way to complete a task. Find a method that works and then stick to it. Believe that you will achieve your goal.

Quote:  “We rise by lifting others.”

If you are still looking for an online opportunity, I urge you to investigate the company I have chosen. Go to my website, https://build2winaffiliates.com, and you will find all the information you need to learn what Wealthy Affiliate has to offer.

2 thoughts on “Alaskan Women Get It Done”